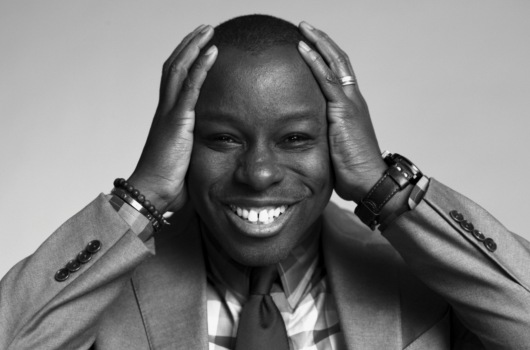 At 49, celebrity hairstylist and Texas native Ted Gibson enjoys a dream hair career that’s as varied as it is esteemed. The sultan of strands has created his own eponymous product line and New York City salon, boasts a makeover gig on “What Not To Wear,” designs editorial looks for the glossiest of magazine covers, and tends to the tresses of it girls like Elizabeth Banks, Lupita Nyong’o, Gugu Mbatha-Raw, and Hilary Duff. His haircut is one of the world’s most expensive at $1,200, but in his early 20s, he made a more modest living selling newspaper advertising in Collin, Texas. Here, he shares his 20-something career trajectory, the advice he’d give his younger self, and the ‘80s-era fashion statement he’d like to forget.

As a kid, I was always in a jacket and tie; my mom always dressed me that way. I didn’t own jeans until I was 13, so I always just feel at home in a tie. I’d tell my younger self to ditch the jheri curl I wore from 23 to 25. Oh, it was the stacked kind — graduated. I used a product to define it called Curl Activator, the same kind they made fun of in Coming To America. They called it “Soul Glo” in the movie. I also regret wearing Z Cavaricci jeans with double belts. I wore a lot of denim in the ‘80s, making up for lost time when I was a kid. But still with a tie, even with my denim shirt and pants combo. I was hipster before hipster was popular.

Growing up, I wanted to work in fashion after watching CNN’s “Style With Elsa Klench,” but in my early 20s, I started out selling newspaper advertising for the Collin Daily Herald in Collin, Texas. I did well in this job; it’s all about talking to people. It’s the same thing I do now! It’s building relationships. Later, I attended barber school part-time while working. The first time I picked up a comb and shears, I could feel it all the way to my toes. I fell in love with cutting hair. When I was in school, I said, “I don’t know what it’s gonna look like, but I’m gonna do stars’ hair.” I moved to a military post doing military haircuts all day. Let me tell you: Guys are the worst. They do not just have the same haircut. I cut flat-tops, high and tights, fades — you had to be really, really good at it. Men are much more particular than women. They pick out little things that you barely see but you see. In the evenings, I’d go to school.

In the late ‘80s, I moved to Austin to work for my mentor Zan Ray, who owned there. She’s a salon coach in Houston now. While assisting her, she taught me the importance of a great shampoo, how to cut, and how to treat a guest when they’re in your chair. I worked as a stylist in her salon and a major revelation I discovered is that I’m not good at color. It makes no sense to me, I don’t understand formulations. I cut well; I understand shape, flattering the face, etc. I colored to the best of my ability for Zan. Aveda was super hot at that time, and I got trained in Minneapolis and decided to move there to work for Aveda. I was 25 at this point and had started teaching at the school.

Seeing people who work here progress is most rewarding. They join knowing little about cutting and coloring and later go from charging $50 a haircut to $200. I love to see growth in my people. It makes a difference. Most challenging about this industry is maintaining relevancy: Once you’re on top, staying on top is a challenge. I’m fortunate that I’ve been able to carve out these different pieces of my business. You have to have many touchpoints; it’s not just about being behind a chair. I’d tell my 20-something self not to stress so much about money, where I was going to live. Everything is going to be all right and good.