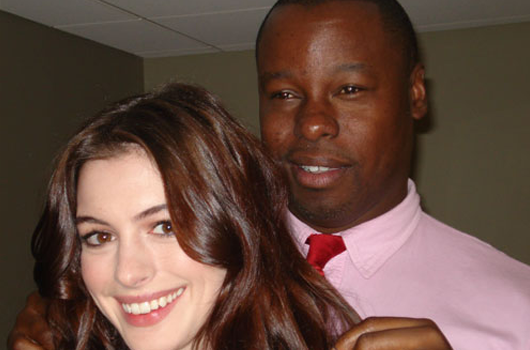 Ted Gibson is a critical force in the beauty industry. As a master hairdresser who coifs the heads of Hollywood glamour girls from Anne Hathaway to Kerry Washington to Angelina Jolie he is in high demand. His star shone even brighter when he recreated the hairstyle of Olympic gold medalist, Gabrielle Douglas. Ted Gibson is now making history as the first African-American Creative Director for Milady’s Cosmetology Standard Text, the bible every beauty school graduate uses.
I have read that you think there should be an Oscar awarded for hair and you are a fan of Bette Davis’ set waves in All About Eve. Thirty years from now looking back whose hair do you think will be iconic?
I would say Angelina Jolie. I don’t know any woman who doesn’t like big sexy hair. When I was working with Angelina that’s what we did; it was all about below the shoulder, a lot of volume in the front, soft cascading waves. That look will be iconic.
You began your career with salon owner Zan Ray in Texas. How did that come about?
It took me about seven months to get a job with her. I would call everyday and drive about an hour to be at the salon. I was her assistant and she was hard on me. I graduated to being on the floor after a year; she taught me how to do a great shampoo, understand the idea of customer service and how to cut hair. It was invaluable. I always say that everyone, when they finish school for barber or beauty, should assist someone so that they really understand what the business is. I don’t think that a lot of young people really get what it means; that you can change people’s lives every single day. And you have to sell products; book next appointments…you have to think about hair as a business not just an art.

So many young people nowadays would consider that to be drudgery, they want to start at the top. It sounds like you always had a sense of the process, that you were being developed?

Absolutely. If you talk to actors they’ll tell you that there are no overnight successes. The ones who have won the Oscar, Tony or Emmy get there because they have cultivated their craft.
It takes a while to understand every aspect of being a hairdresser. From the art of the consultation, to the way the guest looks when they sit in your chair, how they feel, what you’re giving them, what they’re giving you — you can’t learn that overnight.
I’ve been reading about your extensive accomplishments over the course of 20 years — and it looks like you were moving at the speed of light. Did it seem that way to you or did it feel like a long time?
It does seem like it’s gone really fast. I’ve been a hairdresser for about 23 years and having that beauty school license has allowed me to do some remarkable things.
I think that the challenge for most people, regardless if they’re a hairdresser or not is deciding what they want to do in their lives. But I’ve always been really clear about that. The journey is the most important thing but I know the steps in order to get the end result that I’m looking for.

As Creative Director of Milady’s Standard Cosmetology Textbook how do you want to make your mark?
Well, Milady’s is the standard; you find it in beauty schools around the world. There hasn’t been a time in my career when I wouldn’t refer back to Milady’s textbook to check something because it’s a wealth of knowledge.
As creative director I want to make it aspirational, sexier and forward thinking. If you’re in beauty school you won’t mind carrying it around and if you aren’t in school and you see it you think wow, I want to be in the beauty industry!